Sighişoara was founded by Saxons who settled in Transylvania, on a plateau crossed by Târnava river. The name of the citadel was first mentioned in an official document issued by the Wallachian prince Vlad Dracul (father of Vlad the Impaler), who was forced to live here in exile. This small fortified medieval city had a strategic and commercial role of great importance, which knew a flourishing commercial development due to the strong guilds of craftsmen within the area. In 1280, Sighişoara was attested under the name of Castrum Sex (meaning the sixth castle), reaching almost 15 guilds during the 16th and 17th centuries. Being one of the most significant cities in the Transylvania region, this place was frequently visited by artisans from the entire Roman Empire. 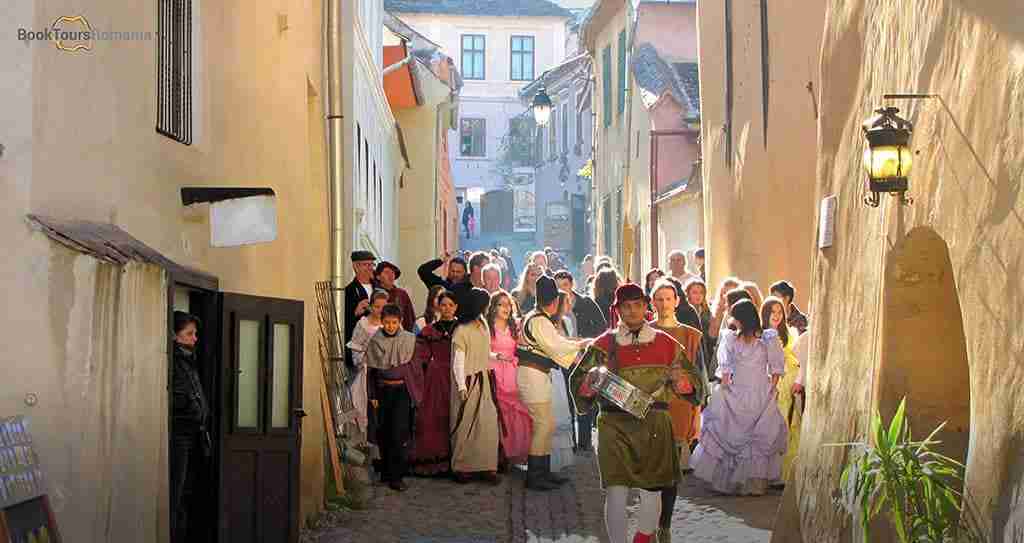 The three main roads of the city which are running lengthways intersect with passages at right angles. Along the streets we can see two or three storey houses, built out of brick or stone, covered with tiled roof. The facades of the houses are made of pebbledash, a small part of it faces the street, but on the inside it displays in a L- or U-shape, with interior yards, inhabitable towers and linked rooms.

Like in the case of the other seven citadels, Sighișoara preserved till today parts of its medieval fortification, to be more specific, nine out of the 14 defensive towers (ex. The Ropemakers’ Tower, The Tailors’ Tower, The Cobblers’ Tower). 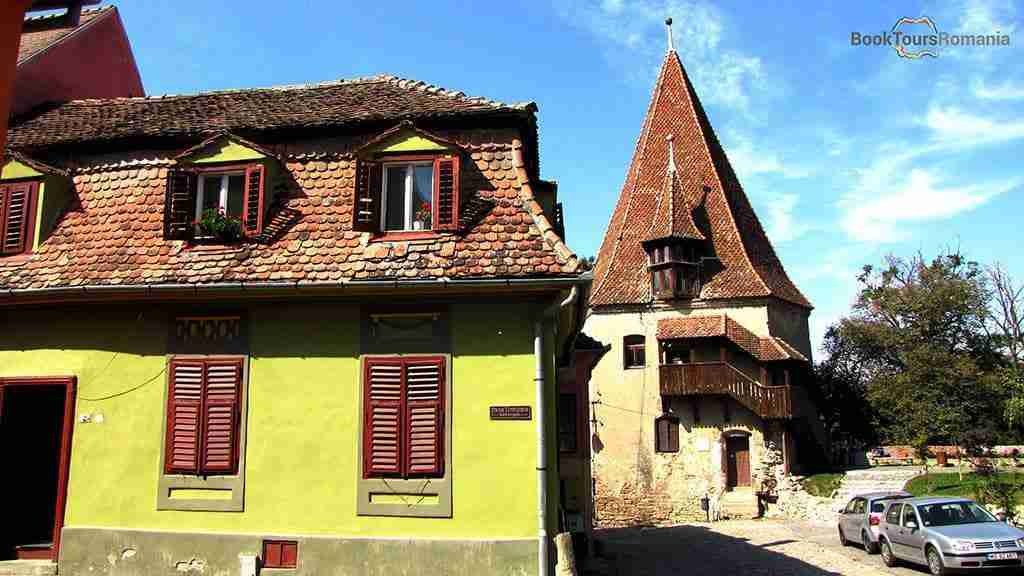 The symbol of this city is the Clock Tower as here the local council held its gatherings till 1556. Built in two phases, first in the second half of the 14th century and second in the 16th century, it presents 4 turrets placed in the corners of the top, a symbol of the town’s judicial autonomy, elements of Baroque style created after the fire from 1676 when the gunpowder deposits located in the Tailors’ Tower exploded and also colorful tiles added in 1894. Since 1899, this building serves a the History Museum but visitors can also climb up to the top to experience the belvedere point over Sighișoara. 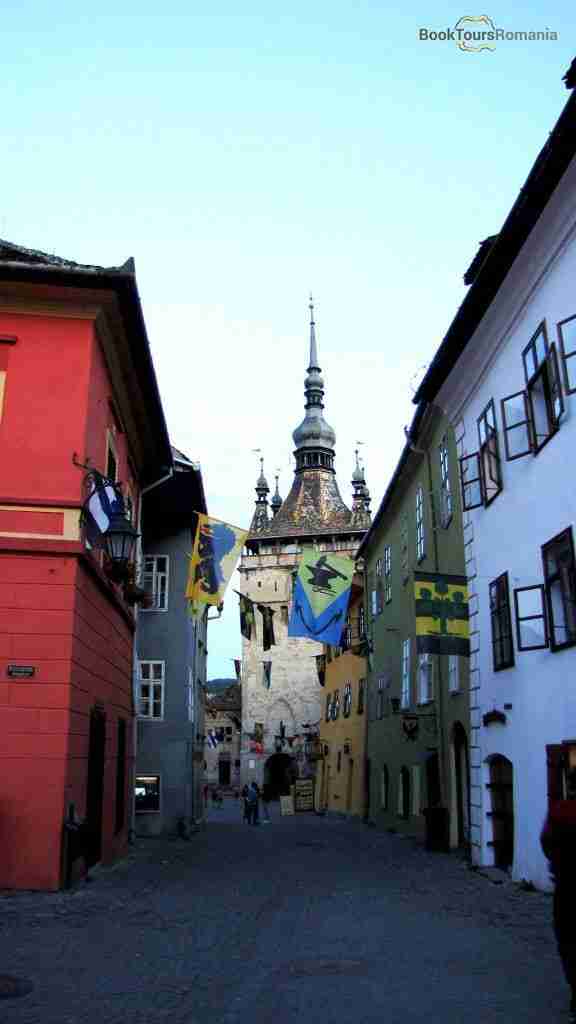 The Clock Tower – the symbol of Sighisoara

The Church of the Dominican Monastery

The late-gothic Dominican Monastery was first mentioned in official documents in 1298 and became later in 1556, the Saxon’s principal Lutheran church. Typical hall-church, has two naves and two colonnades, a door frame in the northern wall dating back to 1570 and carved in stone in Renaissance style, a floor covered with Oriental carpets from 16th and 17th centuries, an organ manufactured in Baroque style and an altarpiece created in 1680. Since its construction, the monastery was twice restored, first in 15th century and the second time in the following century after the big fire resulted from the Tailor’s Tower explosion in  1676.

The Church on the Hill

Another Gothic style symbol is located north to the Clock Tower, placed on the School Hill at a height of 1.373 feet, the Church on the Hill. Although it was initially a Catholic church, after the Saxon inhabitants of Sighișoara shifted to Lutheranism, the church became Lutheran after the reform from 1547. The inside walls were completely painted at first but in 1776 a vast part of the murals were destroyed and never reproduced, although the murals were copied on parchment. Unfortunately, these parchments were lost and never recovered. After the visitors climb the wooden Scholars’ Stairs in front of the church, they reach the precinct of the structure dominated by the St. Martin’s gothic altar created in 1520 and painted by Johan Stoss, son of the famous sculptor Veit Stoss.

Built in 1642, with initially 300 steps which were later reduced to 175, this covered stair passage connects the Citadel Square with the Church on the Hill. It was ingeniously designed to protect the children who went to school and the people on their way to the church. 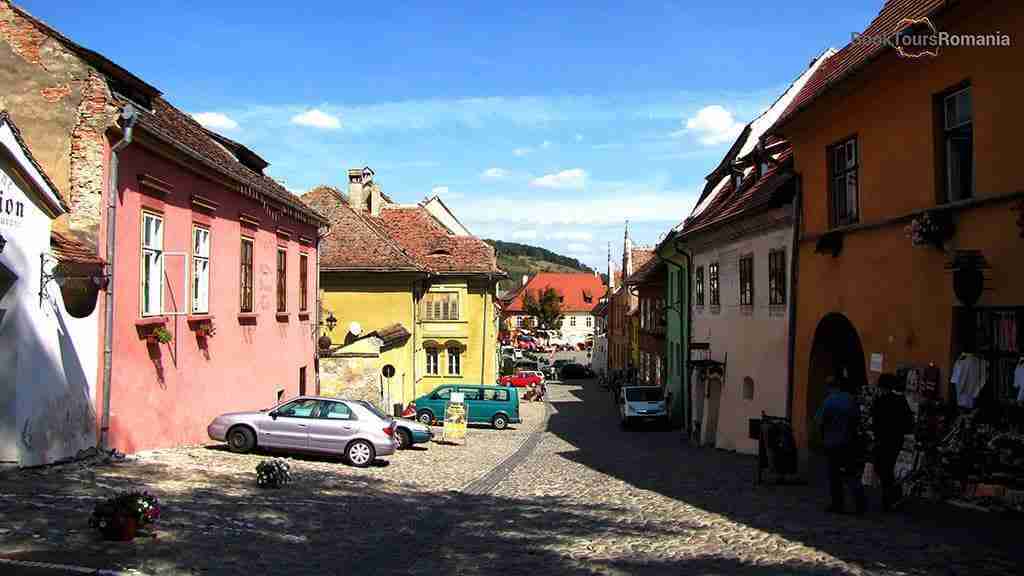 A street from the Sighisoara citadel

The name of Dracul, which inspired the novel of Bram Stoker and other art works, has its origin in the admission to the Order of Dragons, of Vlad II, son of Mircea the Old and father of Vlad the Impaler (Vlad III Dracul). This distinguished statute was offered to him, after he distinguished himself in the battles against the Ottomans. Although in that period the dragons were a symbol of independence, strength and wisdom, in the religious domain it was associated with evil due to the snake resemblance. A symbol of a dragon carved in iron hangs above the entrance of the building.

Vlad III Dracul was borned in this house in 1431 and lived here with his father until 1435 when they moved to Târgoviște. The building has two levels, the first one housing the Museum of Weapons, while the ground floor was transformed in a restaurant.

The name of this house comes from the stag skull on the facade of the building whose mural body was recently revealed after the restoration of the facade. It is a Renaissance construction from 17th century and today it serves as a hotel with a cellar bar at the ground floor.