The Little Paris, at it is also known, Bucharest is Romania’s capital and largest city. Known for its wide, tree-lined boulevards and glorious Belle Époque buildings and a reputation for the high life. 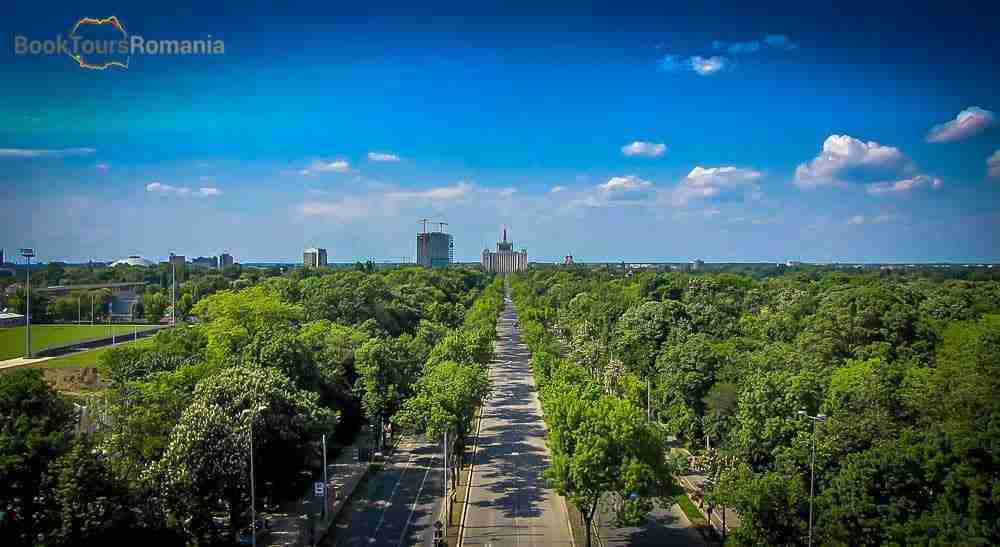 View from the top of the Arch of Triumph

The Arch of Triumph

The original construction from 1922 was made out of wood in the honor of the Romanian soldiers from the First World War. Its construction out of granite from Deva was finished in 1936. It was built following the designs of Petre Antonescu and has a height of 85 ft., an interior staircase through the means of which visitors can reach the top to experience a panoramic view of the city. The sculptured decorations are work of art made by Romanian leading artists like Ion Jalea, Constantin Medrea and Constantin Baraschi.

Victory Avenue is the oldest artery of the city, built in 1692 connecting the old Princely Court to Mogoșoaia Palace. At the beginning it was paved with oak beams. Between the two world wars, the boulevard became more like it is today, a fashionable street. Along the boulevard several important architectural monuments can be enumerated: the Cantacuzino Palace, the historical Revolution Square, the Military Club, The Palace of the Savings Bank and the National History Museum. 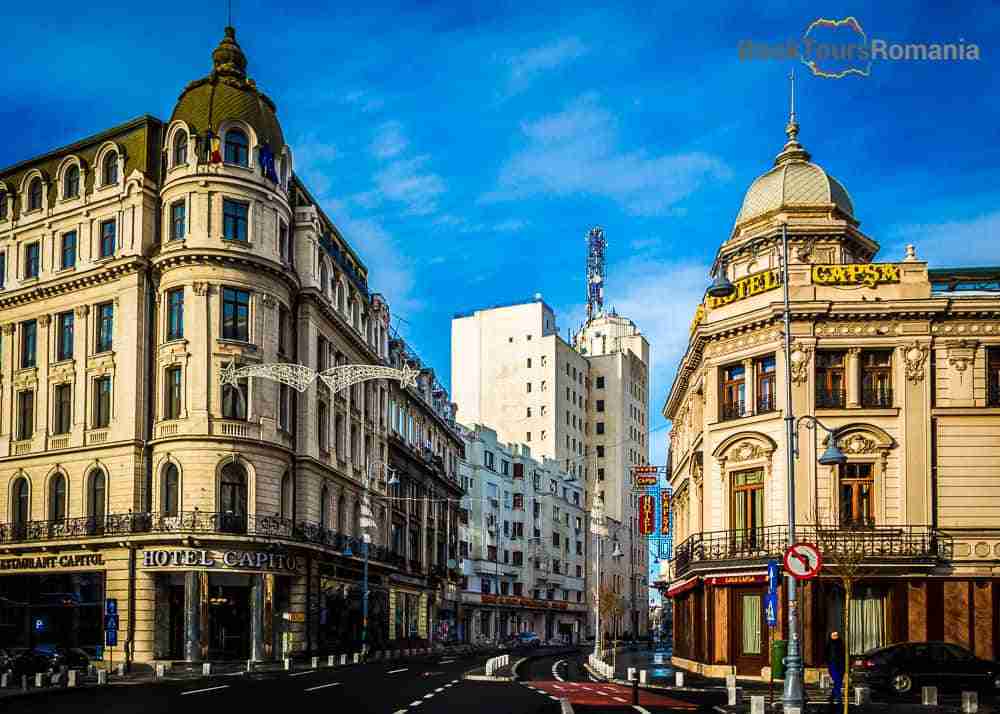 In this Square visitors can admire the University of Bucharest’s School of Architecture, the Bucharest National Theatre, the neoclassical Colțea Hospital with its church and the Șuțu Palace, housing in the present the Bucharest History Museum.

The Palace of the Savings Bank

The palace was built in during the 19th century after the designs of Paul Bottereanu who designed more than 50 other buildings in Bucharest. The building who housed the first Saving bank from Romania, has a facade with Neoclassical elements, a square shape, a central dome with metallic ribs connected by glass and another four small domes. 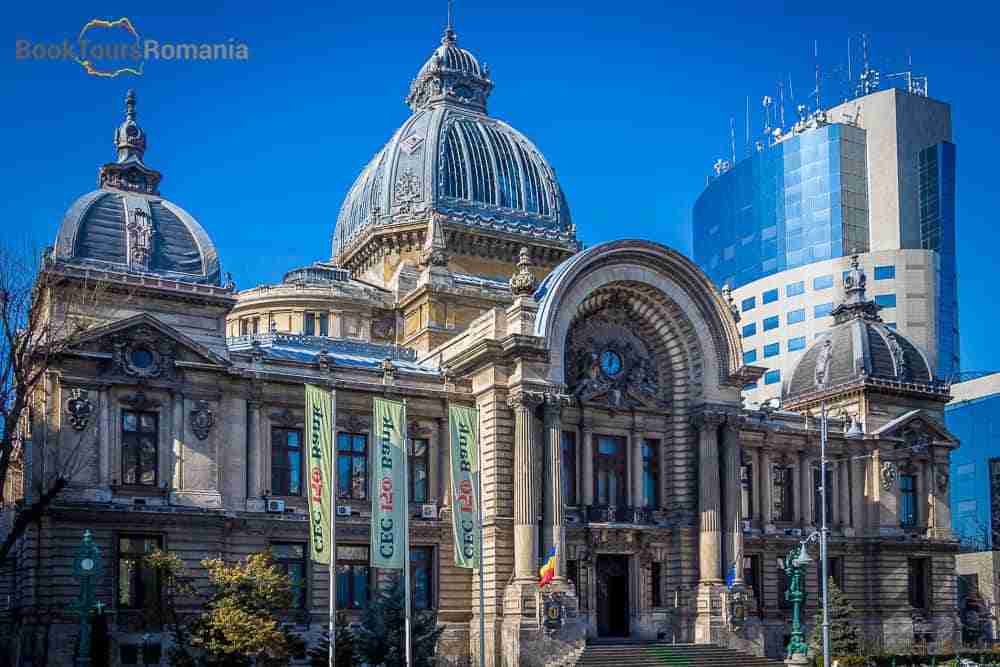 The remains of the Old Princely court which was erected under Vlad Țepeș during the 15th century can be found in the center of Bucharest’s historic area. Among the remains which can be seen through glassed floor encapsulated in the pavement, are walls, arches, tombstones and a Corinthian column.

It is said that in its dungeons, which stretch from beneath the Princely Court to the city, Vlad Țepeș kept his prisoners.  The Museum of the Old Court exists since 1972 when the remains of the construction were discovered after an archaeological dig. Among the discoveries are Dacian pottery, Roman coins, the document attesting the Bucharest origin, issued on 20 of September 1459 and signed by Vlad Țepeș.

Near to the palace is The Old Court Church, considered the oldest in Bucharest, dating back to 1559. For two centuries, the Romanian coronation ceremonies were held here. 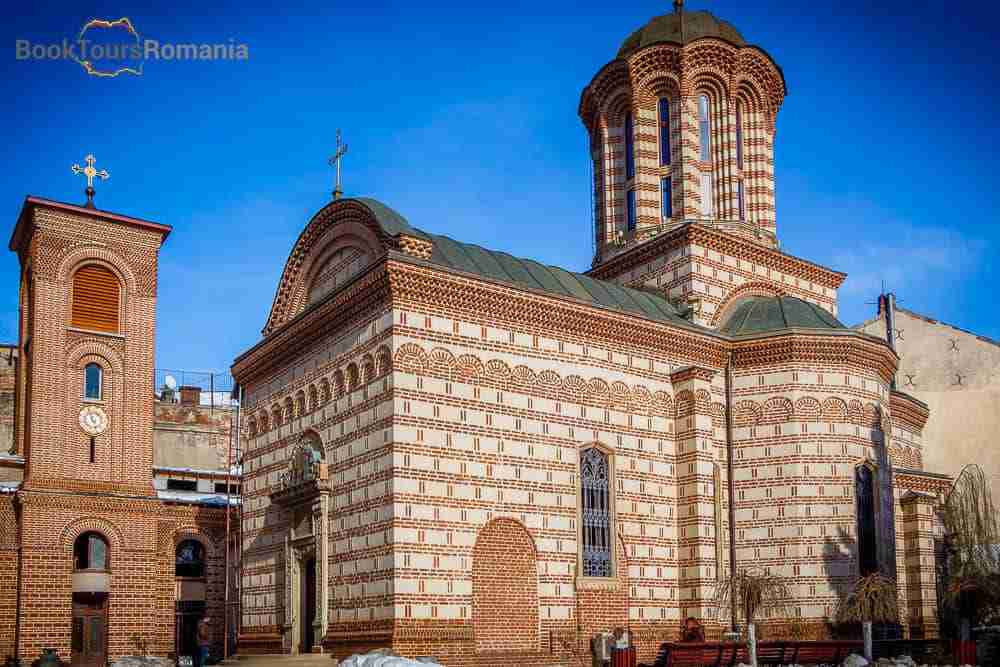 This square is famous for the last moments of Nicolae Ceaușescu reign from 21st December 1989 which were broadcasted on television. Along the former Communist party Headquarter, where these event took place, there are other historical important edifices. The former Royal Place that now houses the National Art Museum, the Romanian Athenaeum and the Athenee Palace Hotel.

The neoclassical palace was built between 1927 and 1937 and here resided King Carol II and his follower King Mihai I till 1947 when the monarchy was overthrown. This was also the place where King Mihai at the age of only 18 led the coup action against the pro-Nazi government during the Second World War and Romania joined the Allies. Today the building houses the National Museum of Art.

The athenaeum was finalized in 1888 following the designs of Albert Galleron  who helped also at the construction of the National Bank of Romania. Its construction was financed mostly by donations made by general public through the fundraising campaign called “Give a penny for the Athenaeum”. The building is mostly famous for the incredible acoustics and it is also a place where numerous concerts are held and also it is the home of the Romanian George Enescu Philharmonic.

Inside the building visitors may admire the painted ceiling decorated with gold leaf, curved balconies which come down in ringlets off spiral stairs and other frescoes covering ceilings and walls of other chambers. 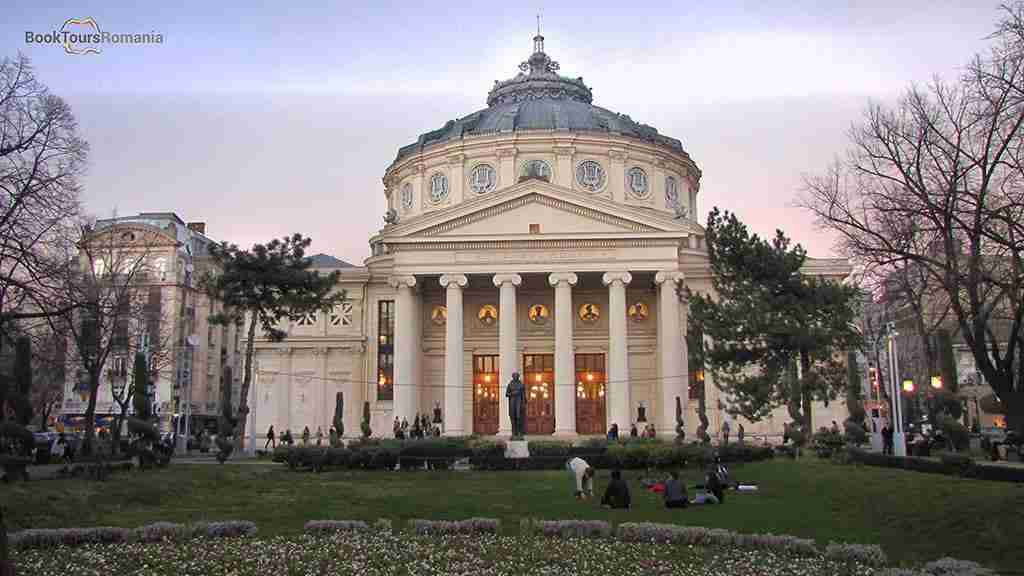 Commissioned by the communist party leader, Nicolae Ceausescu, the Parliament Palace is the second largest building in the world after the Pentagon and only Romanian materials were used at its construction. For the construction of this large complex 20.000 people and 700 architects were required. It has 12 stories, 1,100 rooms, a 328-ft-long lobby and four underground levels, including an enormous nuclear bunker. The interior displays a luxurious aspect with objects like crystal chandeliers, mosaics, oak paneling, marble, gold leaf, stained-glass windows and floors covered in fine carpets. In the present days, it houses the Parliament and an international conference center.

Considered the largest outdoor museum from Europe, with its 30 acres along the shore of Lake Herastrau, it was founded in 1936. The museum consists of 50 representative buildings for Romania’s rural architecture. These buildings and constructions were shipped from different areas of the country to the museum where they were assembled back. Also every year, local artisans come here to illustrate traditional crafts.