Have you heard about the Peleș Castle? Below you will find a brief description of this tourist attraction in order to understand why you should visit it.

Peleș Castle was completed in 1883 and initially it was built to serve as a royal summer residence, invested also with cultural and political functions, such as the Crown Council in 1914 that decided the initial neutrality of Romania in the First World War. Also, here the Royal Family welcomed important guests, including Emperor Franz Josef, who was enchanted by the castle.

The exterior architectural style of the castle is German Neo-renaissance, where as the approximately 160 rooms are finished in a variety of different styles, including German, Italian and English Renaissance, French Rococo and German Baroque. The Council Room, the Florentine Room, the Moorish Salon, the Playhouse, the Armories, the Concert Hall, The Turkish Parlor and others, are all sumptuously decorated, and are considered the most spectacular rooms in the castle. Some of the castle rooms could be visited since the time of King Charles. The first three design plans were rejected by the King because there were copies of other palaces from the Western Europe. But also for being too expensive. German engineer Johannes Schultz won the project because he had an original vision combining different architectural styles. Also other architects lead the works, such as Carol Benesch and Karel Liman, who designed the Clock Tower, which stands 66 meters (217 ft) heigh.

Another important aspect is that Peleș has benefited from electricity and central heating since its inauguration and for this reason it was considered the world’s first castle fully powered by locally produced electricity. Also, Peles was considered quite modern, because it has central vacuum cleaner, pipe organ and elevator.

The Statue of King Charles the first

A few hundred meters from Peleș is situated the smaller Pelișor Castle. Completed in 1903 also at the initiative of King Charles I serving as the residence of the royal heirs. It was built for the future King Ferdinand and his spouse Queen Marie.

Pelișor is designed in the Art Nouveau style by the architect Karel Liman. The furniture and the interior decorations were designed mostly by the Bernhard Ludwig. The castle has several chambers, a chapel, and the famous Golden Room, designed by Queen Marie herself, who also participated at the design process of Pelișor. 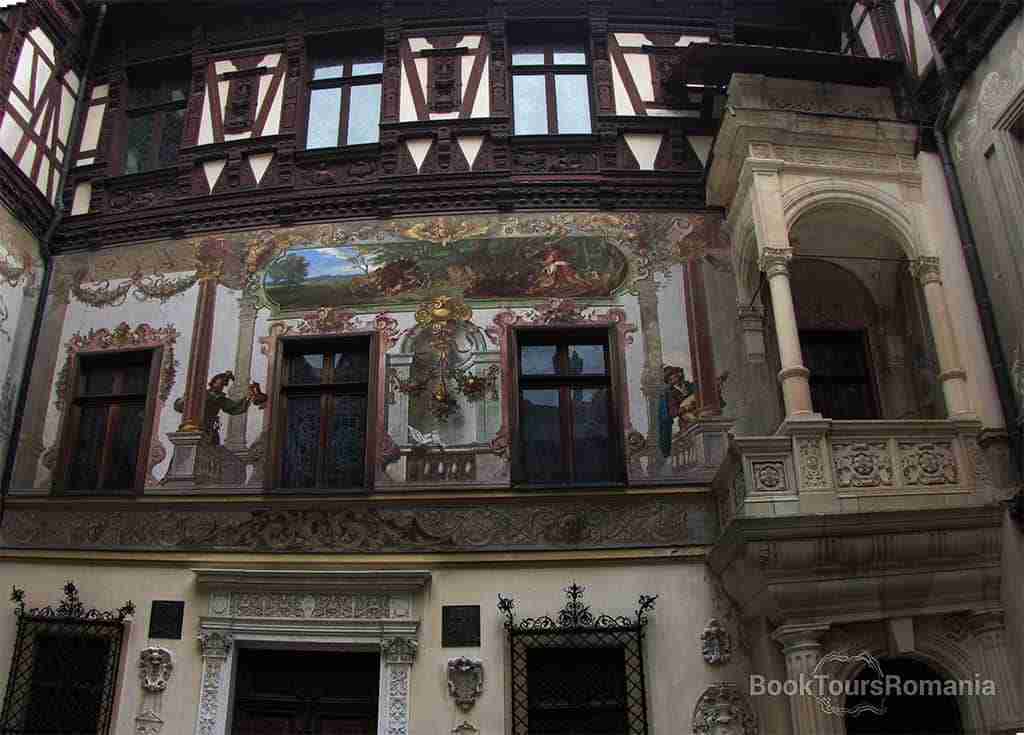 The interior courtyard of Peles Castle

Sadly, in 1948 the communist regime confiscated all the royal properties, and Peleș Castle became a museum five years later. However, in the last years of the regime, the whole area was closed to the public. The properties reserved for use by communist dictator Nicolae Ceausescu. Fortunately, after 1990, Peleș and Pelișor Castles were reopened to visitors.

This been said so far, has these facts aroused you curiosity? Do you want to know more stories and legends about this attraction? Your guide will tell you the main interesting stories and facts about it on a guided tour to Peles Castle.
Go to the top